The fortress Serdica is an archeological site which is located in the centre of Sofia city. . Originally Serdica was founded as a Thracian settlement, but in 27 BC was conquered by the Romans. By the regime of Marcus Ulpius Trajan (98-117) the settlement was granted a status of the town under the name Ulpia Serdica. The fortress was built in 177-180 by the Roman emperors Mark Aurelius and Commodus.

The east side of the fortress was spreading from the green area in front of Rila hotel to the mineral spring at the cross-street between Serdica and Iskar streets. The north wall was reaching the corner of Ekzarh Joseph Street and Princess Maria Louisa Boulevard, from where the wall was going into south-west and was passing under the “Halite” Market. The western wall follows the directions of the streets Washington and Lavele and reaches today’s Courthouse. The southern wall has been documented that was under the Alabin buildings, in order to connect to the eastern wall at Rila hotel.

In the subway, in front of the former Communist party headquarter, the eastern city gate of the Late Antique Serdica has been revealed. It gives only a partial idea of the great fortress wall, encircling the former metropolis. People were able to enter into Serdica through four city gates, and there is an assumption that each one was decorated on the top with a large stone block with a solemn inscription, documenting the date of its construction. One of these blocks, which is not from the east, but from the north gate is exposed in the subway. The western gate can be seen partially under the level of Washington Street, in the courtyard of the in Catholic Cathedral.

In fact, the original wall was not sufficiently strong and due to that reason it was reconstructed, so the walls stood 10 meters above the ground, and the towers – 14 meters. In mid of VI century, under regime of Emperor Justinian the Great (527-565), Serdica is surrounded by new walls. The town became an important administrative and economic center under the name Triaditsa. 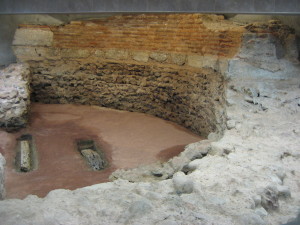 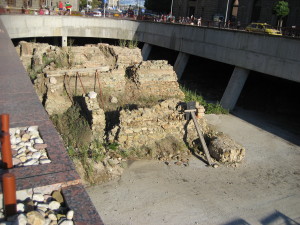