The Church of St George

The Church of St George (Bulgarian: Ротонда „Свети Георги“ Rotonda “Sveti Georgi”) is an Early Christian red brick rotunda that is considered the oldest building in Sofia,when Sofia was a residence to the emperors Galerius and Konstantin The Great . It is situated behind the Sheraton Hotel, amid remains of the ancient town of Serdica.

The church is part of a bigger archaeological complex. Behind the apses is located a former roman street with preserved canalization system, the grounds of a big trinavel basilica, possibly a public building, as well as other small buildings. One of the buildings has the roman heating system – “hipocaust’. The tiles that lift the floor can be seen even today. The specialists name it as one of the most beautiful buildings in the so called “Konstantin’s quarter” of Serdica-Sredetz. There was located the palace of Emperor Konstantin The Great, and later the one of Sevastokrator Kaloyan. The building is preserved as a whole until this day, it is assumed that some of the most important sessions of the Serdica universal summit was held in here.

The rotunda is part of a big antique complex of buildings dating end of 3rd, beginning of 4th century. It is built with red bricks with complicated symmetric plan. The rotunda itself is a central dome room with an oval plan over square ground with semi-oval niches in the corners. It has been used for christening even in 4th century. The dome rises to 13.70 meters from the floor. During its millennial existence the building has been used as a public, cult, and even a residence building.

. Mainly famous for the 12th-14th century frescoes inside the central dome. Three layers of frescoes have been discovered, the earliest dating back to the 10th century. Magnificent frescoes of 22 prophets over 2 metres tall crown the dome. Painted over during the Ottoman period, when the building was used as a mosque, these frescoes were only uncovered in the 20th century. 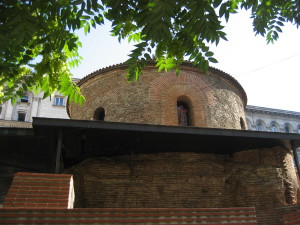 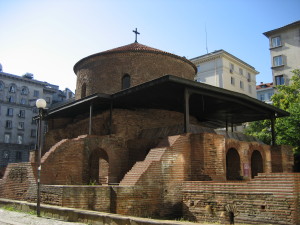