The Ethnographic Institute and Museum

The Ethnographic Institute and Museum (EIM) is a specific unit within the system of the Bulgarian Academy of Sciences, where the science ethnology is developing as well as the preservation of cultural and ethnographic treasures of Bulgarians from the past.

The first step towards the constitution of Bulgarian museum was the establishment in Sofia of the Public Library with a Museum (28. 11/ 10.12. 1878). It was in this way the ideas of Prof. Marin Drinov – founder of BAS, for the creation of a museum at the Bulgarian Scientific Society in Braila, could be successfully realized after the Liberation in the capital. The emergence of the National Ethnographic Museum has been laid in 1892 with the constitution of the National Museum at the Public library (3. 09. 1892), with three departments: Numismatic, Ancient and Ethnographic.

The National Ethnographic Museum is situated in the building of the former Royal Palace – one of the oldest buildings in Sofia with quite an interesting history. In 1873 at the same spot was built the Conak where Bulgarian national hero Vassil Levski was imprisoned and convicted. The building was constructed over the foundations of the former Pasha’s Saray which had burnt in a fire in 1816. The central entrance with a big balcony over the gates still exists but renovated. 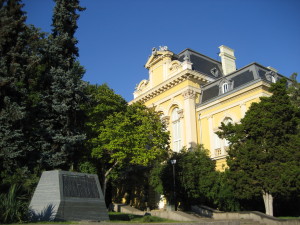