The palace, which initially served as the residence of the Prince and later – of the King, was among the first symbols of Sofia, following its proclamation capital city of the Third Bulgarian Kingdom.

Located on top of a hill in a place of historical significance, related to the symbols of statehood, the existing building of the Turkish konak, which had been restored in 1873-1875 after a fire, was determined and reconstructed to serve as the residence of the Prince.

In 1879 Prince Alexander Battenberg undertook a thorough reconstruction of the palace and entrusted the Austrian architect Viktor Rumpelmayer with the design. The project was executed by the foreign architects Kollar, Grünanger, Leers, Mayerberg etc. The inauguration of the reconstructed palace was marked with an unprecedented New Year Ball in 1883.

Along with the reconstruction of the building, the “Battenberg Plan” included the surroundings of the palace, which were re-planned and turned into a 2-hectar large park, lined with an impressive iron fence. The park was distinguished for its stately decorative southern part and verdure-abundant northern section. The park was designed by Anton Kollar and Viktor Rumpelmayer and the Prince  invited Karl Betz in 1879, to take care of its upkeep.

Prince Ferdinand I, who acceded to the throne in August 1887, undertook the  further reconstruction of the palace building. The Austro-Hungarian architect Friedrich Grünanger in collaboration with architects  Lazarov and Grais executed the reconstruction, which lasted almost till the year 1900. Upon completion, the built-up area covered 25 000 square meters and had 60 premises.

Prince Ferdinand turned the palace into “the most exquisite and finely kept palace in Europe”. The general architectural outline of the palace is eclectic in essence and combines the dynamism of Viennese Neo-Baroque with the tranquil Rennaissance elements both in decoration and general composition.

The park, surrounding the palace was a key element of the architectural ensemble. Its outline was enriched with plant species, decorative lighting, colourful floral compositions and fountains. It is believed, that Prince Ferdinand also contributed with ideas to the design of the park.

The Royal palace and its surroundings hold a significant place in the city planning and architectural outline. It is not a typical palatial complex, but a homogenous ensemble, incorporating public areas and architectural design of buildings, which form an emblematic public nucleus of the capital city. With a preference for the academic and traditional style, this architectural ensemble has had a lasting impact on the development of the central part of the city. 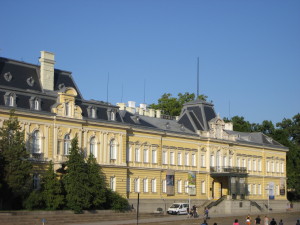