Vasil Levski National Stadium was officially opened in 1953 and reconstructed in 1966 and 2002. The Bulgaria national football team’s home matches and the Bulgarian Cup finals are held at the venue, as well as athletics competitions. It was also used as the home venue for Levski Sofia’s Champions League games.

Prior to their demolition by the Communist authorities during the 1940s, two other stadiums stood on the ground where the current national stadium lies. One of those was Levski Sofia’s club stadium, called Levski Field (Bulgarian: Igrishte Levski, completed 1934), and the other – the Yunak Stadium (built 1928). The latter used to host national football team matches with its capacity of about 15,000 seats.

In 1998 reconstruction works start in order to meet UEFA’s requirements. In 1997 seats were pinned. The works were finished in 2002 before the game Bulgaria-Croatia, that was the official opening of the reconstructed venue. The new seat capacity is 43 340. The stadium is licensed by UEFA with four stars. 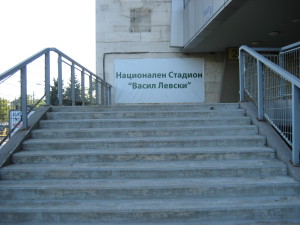