The bridge was built in 1889 from stone at the place of an older bridge called Sharen Most (Шарен мост, “Motley Bridge”) because it was decorated with red and yellow stripes. The name of Lions’ Bridge comes from the four bronze sculptures of lions, its most recognizable feature. All metal elements of the bridge were produced by the Austrian company of Rudolph Philipp Waagner, and electric lights were installed in the early 1900s. The entire construction of the bridge cost 260,000 golden leva.
The bridge is over Vladayska river at the intersection of Maria Louisa Blvd and Slivnitza Blvd, and it connects the central railway station and the central bus station to the city center. The bridge is one of the sightseeings in the city. Right next to it is located the Lion bridge square.

Under the bridge is located the self-named metro station.
There are projects for huge reconstruction of the bridge to take place. The plans are for the intersection to become two-level. 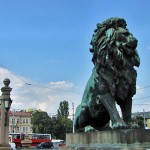 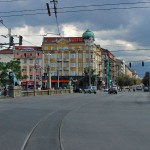 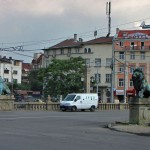 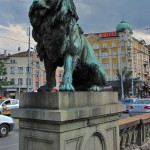