On 22 October 1928 Gen. Vladimir Vazov, the Mayor of Sofia, signed a decree by virtue of which a museum with three sections – a museum, a library and an archive – was established. A picture gallery was to be part of the museum.A building that was subsequently pulled down near to where Graf Ignatieff Street and Rakovski Street intersect housed the library and the museum initially. In 1941 the library, museum, archive and gallery were moved to the building at 3 Banski Square. There the collection of pictures became the first permanent picture gallery in Bulgaria.
In 1948 part of the gallery’s exhibits were transferred to the newly established National Art Gallery. The Sofia Art Gallery (SAG) became an autonomous institution in 1952. In 1973 the Sofia Art Gallery moved to what used to be the city casino at 1 Gurko Street. The exposition was officially opened in 1977.
Today the Sofia Art Gallery possesses some of the richest collections of Bulgarian art: 3500 paintings, 800 statues, 2800 graphics and drawings. The Соntemporary Art and Photography department was founded in 2004. With 1100 square meters of exposition space divided into four compartments the Gallery arranges some 30 exhibitions every year. 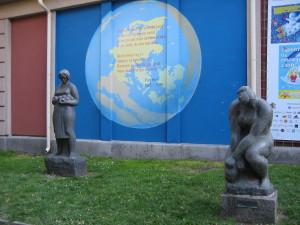