The NATFA edifice in Sofia, The Krastyo Sarafov National Academy for Theatre and Film Arts (Национална академия за театрално и филмово изкуство „Кръстьо Сарафов“, usually abbreviated as НАТФИЗ, NATFA) is an institution of higher education based in Sofia, the capital of Bulgaria. It is the first Bulgarian university in the field of theatre and film arts and was founded in 1948, being the only public and state-run institution of its kind in the country.

The academy, welcoming about 120 new students a year (including 20 international students), is located in three neighbouring buildings in the centre of Sofia, and includes a Training Drama Theatre (since 1957), a Training Puppet Theatre (since 1966), a cinema and video hall and an educational audiovisual centre, as well as an academical information centre that stores 60,000 volumes of Bulgarian and international literature. 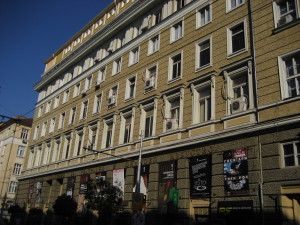