The Bulgaria Concert Hall was built by initiative of the Bulgaria Administrative Cooperative Saving Insurance Company as a part of a complex that was to include a hotel, too.

In 1931 a competition was announced for the design of the complex, which is adjacent to the Tsar Osvoboditel Boulevard. The competition was won by Architects Stancho Belkovski and Ivan Danchov, who designed the final project and assumed the implementation. The construction began in the spring of 1935 and the first parts that were built were the facility of Benkovski Street and the Bulgaria Hall.

The complex was completed in 1937 and its opening was on October 9.

The hall is equipped with paneling for good acoustics with the assistance of Hertz Institute for Acoustic Studies with the State Higher Technical School in Berlin.

In its initial design the Bulgaria concert hall consisted of the big hall with 1470 audience seats (two balconies and boxes) and a stage that could accommodate a 100-member orchestra and a 200-member choir. The chamber hall has 200 seats. An organ of the Frankfurt an Oder Zauer manufacturer was mounted on the stage. It has 4 manuals, 72 registers and 6000 pipes.

During the bombing on May 24, 1944 the hall was destroyed, together with the organ and the two grand pianos. It was reconstructed in 1949 and became the home for the performances of the Royal Military Symphony Orchestra, conducted by Sasha Popov. 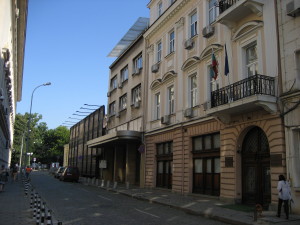