The National Library for the Blind

The entrance is from Solunska Str.

The National Library for the Blind was founded in April 1928. One of its first activities as a cultural union was to begin the printing and accumulation of braille books. Prof. Ivan Shishmanov had the idea of establishing the Institute of the blind in Sofia in 1905. Until 1994 the books were hand made in one copy only. In this way were have produced over 1800 titles, which is more than 12 000 volumes. At the beginning of the 60′ the first tapes of audio books were recorded.

With time the organisation of a small group of blind people became a national braille library. Since 1994 there is computerised printing. 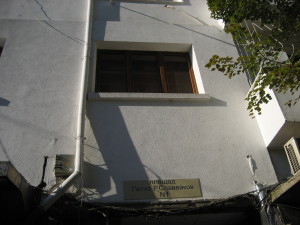