The Synagogue in Sofia

The Sofia Synagogue is the largest synagogue in Southeastern Europe, one of two functioning in Bulgaria and the third-largest in Europe.

Constructed for the needs of the Bulgarian capital Sofia’s mainly Sephardic Jewish community after a project by the Austrian architect Friedrich Grünanger, it resembles the old Moorish Leopoldstädter Tempel in Vienna and was officially opened on 9 September 1909 in the presence of Tsar Ferdinand I of Bulgaria. Prior to the construction of the new synagogue, the lot in central Sofia had been occupied by an older synagogue.

One of the architectural monuments of Sofia, the synagogue, located in the very centre of the city near the Central Market Hall, can accommodate 1,300 worshippers. The Sofia Synagogue’s main chandelier weighs 1.7 tons and is the largest in the country.

The architectural style is essentially Moorish Revival, with elements of the Vienna Secession and, in the facade, Venetian architecture. The main premise has a diameter of 20 m and is 31 m high. It is topped by an octagonal dome. The interior is richly decorated, featuring columns of Carrara marble and multicoloured Venetian mosaics, as well as decorative woodcarving. The entire building takes up 659 m².

Since 8 May 1992 the Sofia Synagogue also houses the Jewish Museum of History, which includes the Jewish Communities in Bulgaria and the Holocaust and the Salvation of the Jews in Bulgaria expositions. A souvenir shop is also in operation. 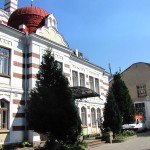 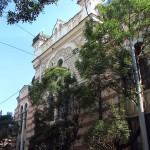