The Monument to the Unknown Soldier

The Monument to the Unknown Soldier (Bulgarian: Паметник на Незнайния воин, Pametnik na Neznayniya voin) is a monument in the centre of Sofia, the capital of Bulgaria, located just next to the 6th-century Church of St Sophia, on 2 Paris Street. The monument commemorates the hundreds of thousands of Bulgarian soldiers who died in wars defending their homeland.

The monument was designed by architect Nikola Nikolov and opened on September 22, 1981, the 1300th anniversary of establishment of the Bulgarian state.

The Monument to the Unknown Soldier features an eternal flame, turf from Stara Zagora and Shipka Pass, sites of two of the most important battles of the Russo-Turkish War of Liberation (the Battle of Stara Zagora and the Battle of Shipka Pass), a sculpture of a lion (a national symbol of Bulgaria) by the noted sculptor Andrey Nikolov, as well as a stone inscription of a stanza (part of The New Graveyard Above Slivnitsa 1885 poem) by the national writer Ivan Vazov:

O BULGARIA, FOR YOU THEY DIED,

ONLY ONE WERE YOU WORTHY OF THEM

AND THEY OF YOU WORTHY, O MOTHER, WERE! 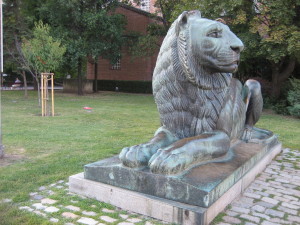 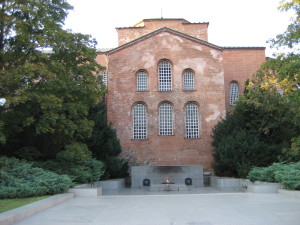