The chucrh was called Sveti Kral (Holy King) in 19th and beginning of 20th century. Around 1460, the remains of Serbian king Stephen Milutin were carried to Bulgaria and were stored in various churches and monasteries until being transferred to St Nedelya after it became a bishop’s residence in the 18th centur

The history of the cathedral’s earliest years is to a large extent unknown. It was probably built in the 10th century and had stone foundations and an otherwise wooden construction, remaining wooden until the middle of the 19th century, unlike most other churches in the city

The former building was demolished to make place for a larger and more imposing cathedral on 25 April 1856. The construction of the 35.5 m-long and 19 m-wide church began in the summer of the same year. The still incomplete building suffered from an earthquake in 1858, which prolonged the construction works that ultimately finished in 1863. It was officially inaugurated on 11 May 1867 in the presence of 20,000 people. A new belfry was erected to accommodate the 8 bells given to the church as a present by Russian Knyaz (Prince) Dondukov-Korsakov in 1879.

The church was razed in the assault by the communists on 16 April 1925 that claimed over 190 victims. The attack was done during the burial service of Konstantin Georgiev. The injured were more than 500 people. It is believed that this was the hardest terrorist act in Bulgaria, and for that time also in the world.

After the assault, the church was restored to its modern appearance between the summer of 1927 and the spring of 1933 (once again inaugurated on 7 April 1933).The paintings of the icons and he intetrior was done by the team led by Nikolay Rostovtzev. It was almost erected anew as a temple 30 m in length and 15.50 m in width and featuring a central dome that made it 31 m high. 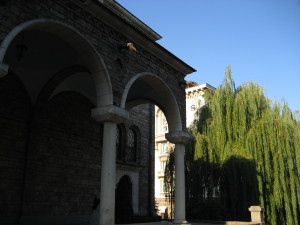 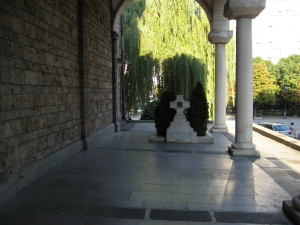 « The National Library for the Blind » National Historical Museum