The Russian Monument (Bulgarian: Руски паметник, Ruski pametnik) is a monument in Sofia, the capital of Bulgaria. The first monument to be built in the capital of the newly liberated Principality of Bulgaria, it was unveiled on 29 June 1882 and is located on the road which Osman Nuri Paşa used to flee from Sofia to Pernik on 22 December 1877.

The funds for the construction of the memorial were collected by the Russian people. The monument was erected on 29th June 1882. It is not exactly known who designed the monument. The monument is an obelisk: a rectangular pyramid with a truncated top and a three-step pedestal. The eastern side of the memorial features a marble relief of the coat of arms of Russia and the Order of St. George, and a text commemorating Alexander II in pre-reform Russian. 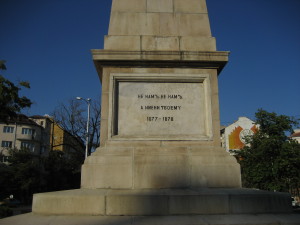