The Church of St Alexander Nevsky is maybe the most popular symbol of the Bulgarian capital city of Sofia and Bulgaria as a whole. It is located in the heart of the city and is the cathedral of the Bulgarian Orthodox Patriarch. Its high gilt domes are seen from many spots around the city and a reason for national pride of every Bulgarian.

The idea about erecting this magnificent Orthodox temple appeared right after the re-establishment of the autonomous and then independent state of Bulgaria after the Russian-Turkish War of 1877-1878. One of the mains supporters of the cause was the notable Bulgarian politician at the time – Petko Karavelov. The decision for starting the construction works of the cathedral was taken by the Constitutive Council held in the last medieval capital of Bulgaria – Veliko Tranovo in 1879. The financial funds were gathered by all Orthodox parishes in the country .

The construction works were symbolically started by the festively laying down of the first stone in 1882. The initial architectural design of the church was created by the Bulgarian architect Ivan Bogomilov. After his death a team of Russian architects led by Alexander Pomerantsev were called to Sofia. They entirely changed the first project. The final architectural plan was ready in 1898 and 6 years later (1904) the real construction works began. The cathedral was completed in 1912, right in the eve of the Balkan War and it can be said that it symbolizes the idea which was conquered the hearts of all Bulgarian at that time and which has not been achieved yet – the unification of all ethnically Bulgarian lands in one country. For the temple were spent more than 5 million leva (the Bulgarian currency).

As a gesture of thankfulness to Russia and its Emperor/Tsar Alexander II, also called “Tsar Liberator”, the temple was dedicated to the most honored Russian saint, a patron of Russia – St Alexander Nevsky. He was a prince of Novgorod in the 13th century and bravely defended the Russians, defeating the Swedish army in the Battle of the River Neva, from where comes his byname “Nevsky”. In 1916, when during the First World War the Russian Empire fought against Bulgaria, the Cathedral was renamed in “St. St. Kyril and Methodius” but only 4 years later its initial name was returned. In the 1990s a part of the wonder-working relics of St Alexander Nevsky was donated to Bulgaria by the Russian Patriarch and it is now kept next to the altar of the church.

A large number of Bulgarian and Russian icon-painters, sculptors, architects and builders took part in the process of decorating and painting the interior of the church. The external facing was started by Italian stonemasons and completed by their Bulgarian colleagues. The plaster casts of the various decorative ornaments on the facade were worked out by the sculptor Wilhelm Gloss. An active role in the construction and decoration works took the prominent Bulgarian architect Jordan Milanov.

The Cathedral of St Alexander Nevsky has an architectural plan of a five-nave cross-domed basilica of Neo-Byzantine type, with an accent over the central dome and the belfry. Very expensive top quality materials were used in the interior and exterior decoration, including Italian marble specially imported for the case, onyx from Brazil, alabaster and others. The central dome is 45 m tall and there is an inscription with thin golden letters around it, telling the popular Christian Lord’s Prayer. The chandeliers were specially produced for the church in the German city of Munich.

The church has very spacious interiors with space of more than 3000 square meters. More than 5000 people can stand inside it, . St Alexander Nevsky was the biggest Orthodox church on the Balkans form 1912, when its building was completed, until 1984, when the Serbian Cathedral of St Sava in Beograd was completed. The belfry is the tallest part of St Alexander Nevsky, raising 53 m high to the sky. It has 12 bells bought from Moscow. The biggest of them has weight of 12 tons and the smallest – only 10 kilograms. All bells together weigh 23 tons.

Some of the most valuable works of the Bulgarian icon painting art are exhibited in the crypt of the cathedral. The exhibition is part of the Filial for Old Bulgarian Art to the National Art Gallery. Here you can see more than 300 icons, fragments of medieval frescoes and various elements from church decoration. 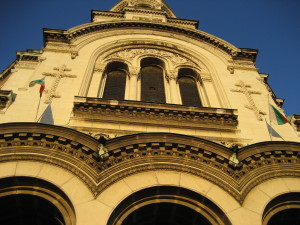 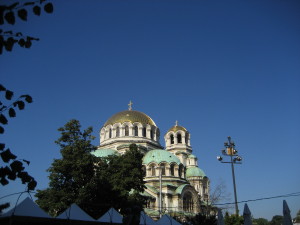