The Russian Church of St Nikolay

The Church of St Nikolay in Sofia, mostly know as the Russian Church, is one of the most elegant and beautiful Christian temples in Bulgaria. It lines up between the most interesting sights of Sofia, included in the list of the most important national architectural monuments. It is built in the fairytale architectural style of the Moscow churches from the 17th century. Its gilt onion-shaped domes lend even more charm and grace to it.

The initiative for its building comes from the Russian embassy in Sofia. Initially it was meant to be a small chapel only for the needs of the Russian diplomats in Bulgaria but it soon became a centre of the numerous Russian emigrants, who found refuge in Bulgaria after 1917.

The construction works started in the beginning of the 20th century and several years later the church was completed in 1914.. It stands on a plot of land, possessed by the Russian embassy, which is in the very heart of Sofia, on Tsar Osvoboditel Blvd (The Yellow Paving-Stones), close to the Cathedral of St. Alexander Nevsky, the Parliament and the Presidency.

In the 1920s the Church of St Nikolay became the cultural centre of thousands of Russian whiteguard emigrants in Bulgaria. In the church held service Seraphim Sobolev – the archbishop of the Russian Orthodox parishes in the country. After his death he was buried in the crypt of the temple. Although Seraphim Sobolev has not been canonized for a saint, he is actually still honored as such. It is believed that his relics make wonders and heal ill people.

Soon after the Bulgarian political changes in 1944, the Russian Church became part of the diocese of the Moscow Patriarch and it is still possessed by the latter.

The architectural project of the church was designed by Michel Preobrazhenski, professor from the Saint Petersburg Art Academy. He also created the design of the Orthodox churches in Talinn and Florence. Preobrazhenski took an active role in the construction of the church-monument near Shipka, Bulgaria too.

The Church of St Nikolay consists of central domed premises without supporting domes, eastern altar part, western platform for pilgrims, north and south nave. The most remarkable elements from the exterior of the church are the ancient Russian styled domes in the characteristic onion shape, covered by a golden plate. They are five – the central and four smaller side domes. The magnificent mosaics in old Russian style are impressive too.

The church has two entrances – southern and northern. Each of them is covered by a ridge roof with triangular frontons, decorated with splendid icons of St Nikolay the Wondermaker (the southern one) and St Alexander Nevsky (the northern one).

The interiors of the church are painted by a team of Russian artists, lead by Professor V. Perminov. The walls and the ceiling in the northern nave depicts the magnificent composition “The Resurrection”. In the souther nave you can see the icons of St Nikolay, St Ivan Rilski and Christ Pantocrator. The last one dates back to the 18th century and was created by an unknown but very skillful Greek icon-painter.

The beauty of the interiors is very much exalted by the one-row majolica iconostasis. It is gracefully decorated with various multicolored ornaments and gilt. Duplicates of famous old Russian icons from the St Volodymyr’s Cathedral in Kiev are lined up on the iconostasis. 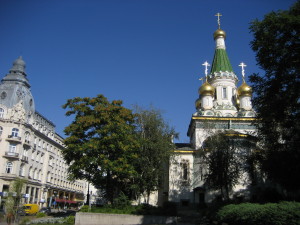 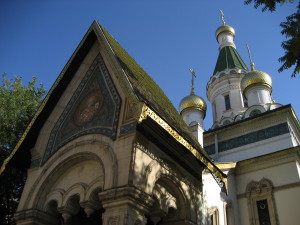